Champions in the water

When we read various posts on the internet, it is very rare to think about who might have written the lines that interest us. Often we just bite the letters and words, and maybe not a second flash of why the author might have stood by him for the puffing of the characters. That is why, now come a little personal, on the basis of which a sketchy picture can be formed of who may have committed this little coal and for what purpose.

Our story begins with a quarter of a century of time travel, when the life of a little boy with glasses and anti-sports changed radically and he found a new passion. It was all a tiny coincidence and has since changed from passion to love. All that happened was that the husband of our primary school class teacher, strengthening the Vas County team, reached a national final, organized by the Hungarian Television and the Hungarian Olympic Committee, “Directed to Atlanta!” In the series of intellectual competitions called the Olympic Olympics, he also won the first place and was able to support the Hungarian team at the centenary Olympics on the spot as a reward. Somewhere here the rocker switch could have clicked through my head and after that I wanted to discover every moment of this wonderful story, especially that my heroes were just an arm’s length away. I remember exactly that due to the big time shifts, the interesting events for the Hungarians started in the late evening, so I hid under the duvet after the “cover” – I got my right ear on my little radio, where I could surf and enjoy the brighter light on the waves of Kossuth radio. to success.

However, let’s turn to the subject after this moderately successful introduction. The three gentlemen, named László Gál, Zoltán Szakasics and Vilmos Horváth, thought big and in order to pass on their vast knowledge and spread the Olympic idea, they founded a traditional association named after the two-time five-ring champion Zoltán Halmay.

The Halmay Cup has been held every summer since 2000 in honor of the swimmer, who won the brightest medal at both the 50 and 100 yards at the St. Louis competition in 1904. 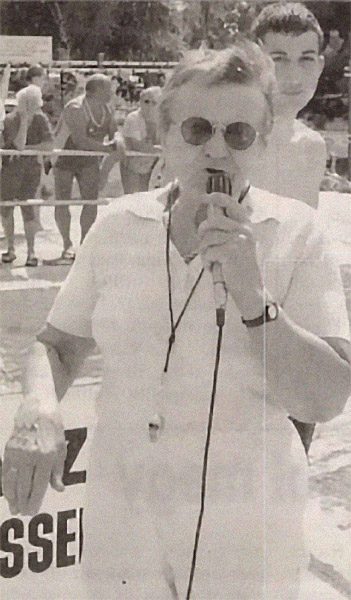 Of course, as the years went by, there was a growing interest in the competition, where athletes in several ages could compete in the 50-yard run. The organizers used all their contacts and year after year the most famous patrons could stand on the shores of the “float” in Bükfürdő. The first really big name was Tünde Szabó, an Olympic, world and European championship silver medalist, who was considered the “silver girl” of the age in the shadow of Krisztina Egerszegi.

On the next clash, a “cute” guest paid his respects, when one of the 1952 Olympic champions, Judit Temes, gave useful advice to the starters.

Thanks to Bükfürdő, the competition quickly became international, as in 2006 seven nations were already represented among the starters. In the year of the Beijing Games, a silver girl – Éva Risztov, who was considering retiring, was also the guest of the star – who in 2012 delighted the sports-loving inhabitants of our small country with the brightest medal.

The success story, written twenty years ago, has reached its maximum goal of promoting the Olympic idea. The merger of Bükfürdő and the Halmay Cup faithfully reflects the principles of the five-ring games and also introduced the idea of Couberten in the spa town of Vas, which has been a great host and organizer of the competition throughout. Perhaps there is no other settlement in the country that boasts as many Olympic champions as Bükfürdő.

Have you read this?

Memories of the past

—the rebirth of the legend “Making poppy beans is turning two pages in the cookbook,” proclaims the well-known wall slogan jokingly, which perfectly illustrates the experimental and extravagant...
Read More

The place of the bliss is: locations. Such a milieu can be a good choice not only because the wedding crowd breaks out of the squirrel wheel and the proximity of the plants creates an intimate...
Read More

– an inn in the "CENTER" - We were able to select perhaps the most appropriate title, as “in the center” fits perfectly with both the location and the role of our restaurant in society. It is safe...
Read More